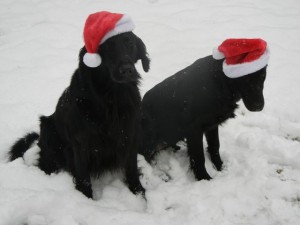 Do we have to wear these hats, Mom?

Christmas 2010 was a bittersweet holiday for me this year. It was our first christmas without Disney but our first christmas with Reagan. One of the hardest parts was unpacking the boxes of holiday decorations. With golden glitter lettering sat Disney and Lincoln’s stockings which brought back the tears. Not sure what to do, but not wanting to put them back in the box, I gently laid them on the fireplace ledge. I would celebrate their memories this year and every holiday in the future. I had a photo of young Disney at 6 months and the regal english gentleman,  2 year old Lincoln with Santa and a more recent picture of the “3 wisedogs”- Lincoln, Disney and Keaton. There was minimal gray on the faces of the two older dogs in the latter picture.

Reagan got to visit Santa with Papa Keaton at the Zionsville Animal Hospital in December. Of course, Santa’s elves were busy taking photos. Proceeds went  to the Boone County Humane Society . Reagan was unfazed by the man in the white beard and red suit. Keaton was VERY INTERESTED in his bag of goodies. The elves gave all the “good dogs”(not sure mine really were in that category, but they might have had lower standards for levels of goodness). Keaton was very excited to show off his new toy.

Christmas eve events brought a day of cookie making in Pemberly’s ktichen.  For those who know me, Cooking is a rare event at my home unless you include boiling water and microwaving lean cusines. The dogs were great company and did a first rate job of licking the cookie bowls.

We had a white christmas this year which made the season much brighter although I was glad when it all melted and the roads were safer to walk on .

This entry was posted in Uncategorized. Bookmark the permalink.