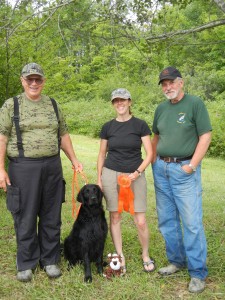 It was apparent that Keaton was a dog who NEEDED to be worked consistently to keep him grounded. Work had been busy and the extreme heat and humidity made training difficult.

Although dogs can sweat from their pads, the majority of the heat is expelled by panting. Short work-outs , shade, water and fans to circulate the air all help. Marks and blinds are often made shorter especially with high cover holding in hot air. The ponds, unless stream fed or deep, often are no cooler than the hot air so great care needs to be taken to not overwork in the water too.

We choose the Presque Island Retriever Club test as our next master test. The judging panel looked fair and Hambden was the test grounds. The grounds at Hambden offer ample shade , a big selling point in august.

I drove up friday afternoon and after a  short unpacking, headed to downtown Hambden to let the dogs run at our favorite cleveland park. It has a large walking path around the edges of several baseball fields and is just a few miles from the test ground. Keaton and Reagan were happy to run after a 5+ hour road trip.

We could not have asked for better weather. The humidity was low and the temperature never got above the mid 70s. Master had 85 total entries which were divided into 2 groups (A , B). There was every retriever breed accounted for: Labs(show and field), Goldens(show and field), Flat Coats, Tollers, Chessies, Curlies, Standard Poodles and Irish Water Spaniels. In AKC, these are the only breeds able to participate. It was great to see ALL recognized retrievers present and working at this level!

Our first series was a triple land series with a blind. The marks were tight and the early shade patterns and light reflecting off the grasses and leaves made visibility alittle difficult. In addition, changes of cover and the tree cover  challenged the dogs . The land blind was between the first and second mark and in front of a groove of trees.

There was danger in losing your dog behind the trees and cover so handlers had to watch that the dogs did not range out of the fall area. The “go” bird was across the road and landed just to the right of a long row of trees. Many of the dogs misjudged the depth of the mark and ran long. Other dogs were running so hard that they overran that mark and several had to be handled back to the area or just “happened” on the bird.

Keaton had no problem marking the go bird , a short hunt on the left hand bird and a nice mark on the middle bird. His initial line to the blind was good, but he started to drift toward the fall of the first bird so I  sat him and casted him with a right angle back . He took it, but started to hook behind the groove of trees. I was a little slow on my whistle, but thankfully could still see him. A short over and he picked up the blind bird. We were called back to the second series.

The second series was the land/water series which was a double with a double blind. The pond had several small coves and was not a big body of water. The ponds on Hambden are surrounded by bushes and decorated with a lot of “water hostas”(I dont know what the real name is but sure look like misplaced hostas to me.) This  pond was also a “stick pond” which contain stumps of dead trees protruding through the water.

The water was lightly covered with “duck weed” and leaves from surrounding trees givin g the surface a curious look. The first mark was a long land mark past a groove of trees coming left to right from behind a wood pile . The second mark was a 180 turn to the left coming from  a point off the middle portion of the pond landing into a cove in the water.

One of the blinds was past the land bird to the right again in front of a tree surrounded by bushs with the danger of losing a fast or unresponsive dog. The water blind was to the right of the water mark past a small cove and up on the land in front of a tree about 40 yards. The judges made it clear that the 2nd blind was a WATER blind and the dogs needed to get wet. Since it is faster to go by land than sea, many dogs will opt to run around a small body of water rather than swim. The “line” to the blind was through the center of the right pond.

Keaton is a fast dog and I am not always a fast (or smart) handler. They say this comes with experience so I am hoping my skills will sharpen as me and my boy progress. The dogs wanted to suck to the tree line and if they got in their it wasnt easy to get them out. Keaton took a nice initial line , but it was near the end where he darted behind a tree. I managed to pull him out and to the blind(partially due to his fabulous nose). PHEW!

Again a beautiful initial line to the water blind. However, it was a deep pond with alot of grass around the edge and suction to the land mark beyond the water .He took a turn to the right and although it took a couple cast, we got back on line and to the blind. I had more casts on these blinds than any he has run to date at tests. I wasnt sure we’d get a call back, but they invited us back for the third series.

Sunday was  a cold and rainy day. Remember, its August and more usual to have dry and 90!  They say Cleveland gets a lot of rain due to the lake affect and it showed . Cleveland was green and Indy yellow and brown. The rain showed no signs of slowing down that morning, but it wasnt pouring . Rain never stops a hunt test, but thunder and lightening do-there was none of that.

I about died when I saw the third series, a down the shore triple. Something we struggled with on doubles let alone as a triple. The good news was that I had no handles(Keaton had picked up all his birds in the first two series clean). The judges made sure to remind us to HANDLE if we needed . 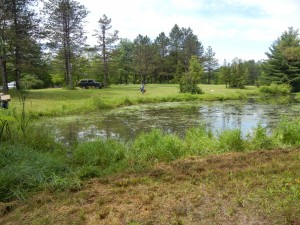 This series was run from the opposite side of the same pond that we ran our second series. It is amazing how different a body of water can look the other direction. The difficulty of this test was that in the water, at a dog’s level in the water, the pond looked the same. Vegetation around the edges of the pond and duck weed across the surface  created this uniform like pattern. A few decoys were scattered at areas to distract the dog.

The birds were thrown left to right with the first bird down being the longest mark. The “go” bird was short and breaky, but Keaton waited to be sent. I lined him for the middle bird which he indicated that he remembered, but he drifted right and picked up the far bird. I relined him for the middle bird and again indicated the correct bird, but once he was actually in the water and swimming forward, he began to move right. I knew this was the time to handle. I stopped him and he turned and I gave him a left over which he took nicely to the bird.

All we had left was the honor. The honor spot was up on land with the go bird close . Keaton had always done well on honors but water and close birds can really up the excitement. The birds went down, Keaton honored and we walked off the line with a new title!

It took a while to sink in -that we had achieved our goal – a champion master hunter. Keaton, son of the famous and always entertaining Disney, did his mom proud. The journey has just begun though. We will continue to run at the master level and perhaps be backwater retriever clubs first hall of fame flatcoat( an award  given to a dog/handler team  for 10 master passes -we are at 5 now!).