Two long time flat-coat friends of mine let me borrow a ” puppy mobile.” It was an idea that they found in the Whole Dog Journal for puppy enrichment. Puppies undergo what is long been known as a critical social period between 4-13 wks of age. It is during this period that the greatest learning occurs so it is important to expose dogs of this age to a variety of environmental stimuli including different types of people, sounds, sights and places. If left isolated and under stimulated, these puppies can become fearful and often exhibit separation distress and aggression.

The critical period for sociability to other canines is a much smaller window which occurs at 4-6 weeks. Therefore, it is important not to separate pups at this age from their litter mates so they may learn appropriate behaviors around other dogs. If a bitch whelps only 1 puppy, it is important to keep this singleton around it dam during this period and expose them(safely) to other puppies their own age. When possible, singletons may be joined with other nursing litters or the breeder may choose a local shelter to adopt 1 to several pups of similar ages and raise them with the singleton.

The puppy adventure box was constructed with PVC and PVC joints and holes were drilled into the piping to hang items in the setup. It was puppy “Disney World” to the crew of 8 at Pemberly. The items have been changed daily using different textures, sounds or shapes. 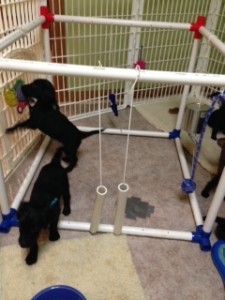