The first of our puppies to go to their new home was Orange now known as Hudson. Hudson will live  my stepson, Christopher in Louisville, Ky. It is his first dog as an adult and his first flat-coat.He will be Chris’s hiking buddy and perhaps hunting dog. I get the added bonus of having the opportunity to show Hudson(Pemberly’s McKinley).

Nancy not only helped me whelp the litter and give them another vet check-up, but she took home Miss Purple (Pemberly’s Destiny Meet Me at the Summit).Nancy was a great help with my litter. I got lots of good advise, puppy supplies and small crates to help with the crate training process.  Call name still up in the air . She will be shown in the breed ring and obedience and run hunt test. She joins her  Flat-Coat Grandma Lilly in Terre Haute, Indiana. 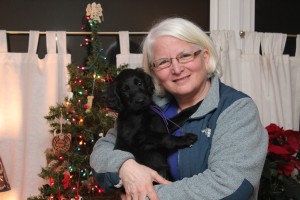 Liz, Michael and Hanna took home Mr. Green , “Scout” to Michigan along with their 13 year old Rat Terrier, Lucy Pickles. She will be mom’s obedience dog, Dad’s hunting buddy and Hanna’s best friend. This is their second flat-coat. 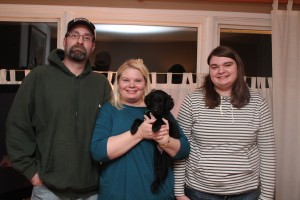 On Sunday, we had our little Rainbow girl go home at 9am(sorry Brian for the early pickup). Her new name is Tilly(Pemberly’s Fairweather Flight) and her new flatcoat friend is her aunt Claire(Taylor’s sister). They live in the  Beech Grove Area of Indianapolis. She will be shown and loved by Alicia and Brian Craig. 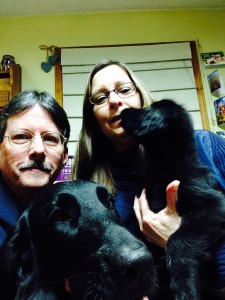 I do not believe that I mentioned that I had picked up a horrible cold that week and lost my voice saturday so giving all the instructions and information about the new owner’s pups was not easy. I do not get sick very often and I am sure the stress of caring for 11 dogs and the holidays did not help.

The next pickup was for Miss Pink’s new home. Pink has eyes that melted my heart and was always the first one up to the pen side to get pet or held. She was going to be living with good friends of mine, Fritz and Janet Krull. This is their 4th flat-coat. They lost their beloved Whisper last fall. She was Keaton’s only sister and one fun old gal. Mindy(Pemberly’s Blue Ridge) also has a home with  flat-coa companion, Echo another sister of Taylor.

The Krulls live on a lake up in Northern Indiana  so the girls will have the quite the view from the living room window. 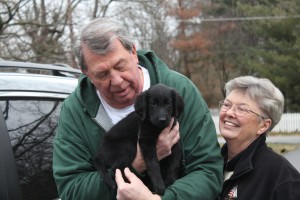 At noon Terri and her son from West Lafayette, In came to pick up their new boy, Mr. Blue. We are still waiting to hear his name. He also has a big flatcoat sister, Storm who is a year old . They will have fun with the family pool next summer! 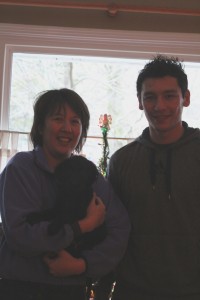 Sunday evening the temperature dropped, the wind picked up and snow had started to land in the area. I had told Heike that she could wait till monday to pick up her little girl, Miss Red if she did not want to travel especially since returning home from Chicago that day. No, she wanted to come get her as she had promised her three kids that she would get their puppy tonight.

Heike and her family just moved here from Germany and live in Zionsville, In. They have a 13 year old flatcoat named Gizmo who they acquired from Hamburg. Hamburg is the city where Keaton’s(Taylor’s dad) brother lives with his mom Wenche. Miss Red is now Selma(Pemberly’s Zugspritz) Zupspritz is the highest mountain in Germany and the family has skied on this mountain.

Selma will be shown in conformation and perhaps other performance venues. She will also be best buddy for Elsa, August and Karl, her 2-legged siblings. 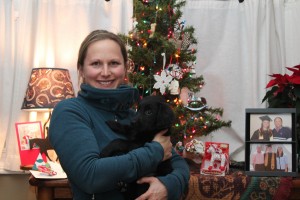 So, you might be asking, Now isn’t there 8 puppies in this litter?  Where is lime green? Well, we get a bonus extra week with Limey. More to come about his week with us.