The Makings of a bird dog

When the puppies were only a week or so old, I would bring out a pheasant or duck wing for them to smell. I would run it across their fur as they slept or leave it in the box to see if it would engage them. As they got older, I would drag it or flutter it on the ground to see who would follow.

Although genetics can help determine why some dogs have an affinity for birds and others for sheep, environment can help shape behaviors we are looking for in our working or pet dogs. Since the attention span of a puppy is short, I usually limit my retrieves to 3 or 4. I also choose a hallway or restricted area so the only option is to come back by me!

It is natural for a retriever to go OUT after an item, the return has to be taught. Most dogs would sooner take a “prized possession” back to their den(often a crate or favorite area). If the puppy returns to me with his item, I don’t try to snatch the item directly from them, but praise them for their job well done. Instead, I will keep them close to me and pet them(even if they try to wiggle away) before trading the item for a tasty treat or another item to toss.

So, this leads me to an email I received from George’s owner(lime green boy) last week on his latest adventure.

From the pen of Jim (George’s Person):
So when I got the day off from work because of the weather, I decided to use it to get ahead on my homework for Numerical Analysis. I was busy working a Bounded Value Problem while keeping half an eye on our new Flatcoat puppy, George, when I heard scratching at the door. I thought, “Can’t be the dogs, they’re all inside.” so I ignored it. A few minutes later I heard the scratching again and was instantly mortified. I thought that I left our older min-pin mix, all 9 pounds of her, outside for more than an hour in 20 degree weather. So I slowly opened the door expecting to find a dog-sicle who won’t speak to me for a few days when I found a wren that had found it way between the entry and screen doors.

As is their wont, the wren didn’t wait for me to open the screen door to let him outside but instead took off at top speed into the interior of our home. My first thought was “This can’t be good.” I’ve got a bird in the house with three bird dogs, one crazy dog that barks incessantly at anything more dramatic than shifting one’s bottom in a comfortable chair, three cats and a gecko.

So I went outside and closed the door.

I went to get my bird catching net. I have one, of course, because I sometime raise quail because I like them and they’re cheap. I like motorcycles, too, but they’re not cheap. But I couldn’t find my net because I didn’t want to walk thought the snow to where I store my net so I went back inside to develop “plan B”.

Plan B entailed using one of my wife’s bath towels to try to ensnare the bird without hurting it. I retrieved a towel and joined our three bird dogs: Boomer, our 2-year-old Flatcoat; Cleo, my 6-year-old rescue lab who supposed to be my next duck retrieving machine; and George, our 10-WEEK-old flatcoat pup, who were running willy-nilly trying to find and catch the bird. Run to one side of the house, sniff everything until the bird flushes, and then run to the other side or another room and do it again. They were having great fun. The min-pin, of course, stood in the recliner and barked at everything, the cats were long gone, probably making plans for how to catch the bird once the dogs found a stick that was more interesting, and the gecko only leaves its cave for crickets.

So the four us chased the bird around the house. I would vainly toss the towel at or near the bird more in the hopes of not destroying anything near and dear to my wife, because I can explain a bird in the house, but I can’t explain how Aunt Ginny’s chest got scratched. The min-pin barked. The cats planned. And the four of us ran around the house tossing towels and trying to find where the bird went after I tossed the towel.

Finally, the poor wren made its mistake. He (or she) waited too long to take flight after landing on the kitchen counter and I covered her (or him) with the towel. I was able to get my hand under the towel, get my hand around the exhausted fowl, and extract her. I let her go (outside) and, just like all of the other birds that I’ve caught by hand, she took off none the worse for the wear.

So now I’ve got a hand that smells like fowl and three bird dogs. I put my hand to Boomer. He sniffed it quickly and decided even more quickly to keep looking for the bird. I gave my hand to Cloe, she of the duck retrieving game. She gave it just a moment more than Boomer before deciding to join him in the hunt.

Then I gave my hand to George. He got just a slight sniff at first, but then immediately stuck his nose in my hand to get a noseful of the fowl’s scent. He licked and sniffed my hand until the din of the two big dogs got to his brain and he had to see what they were doing.

I think I found my bird dog. 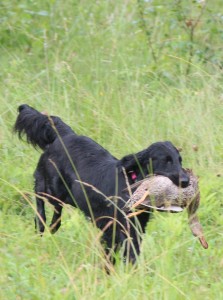 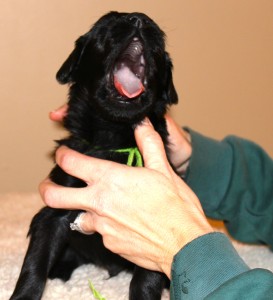 “I want to go duck hunting too, Mom” cries lime green at 4 wks