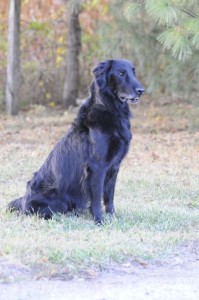 My first flatcoat was a British gentleman named Lincoln or  as noted by in the AKC books as CH Emanon Lincoln CD JH WC CGC. He was imported from SouthHampton , England(the port from which the  “unsinkable”Titanic set  out from) and bred by long-time breeder and  judge, Peggy Miller of Emanon Flat-coated Retrievers.

He arrived at the Detroit airport at 8 weeks old and full of barking complaints about his very LONG flight alone in cargo. You could hear his puppy howls in Customs as his handler wheeled him out in his sky carrier looking fatigued as did all the passengers  of this NW flight. She happily handed over this exuberant black fur ball to his new Amercian family along with his UK papers, a book by Brenda Phillips on the breed and his vaccination history.

Lincoln was not only my first flatcoat, but my first conformation dog, my first performance dog and our first gundog. He shared my life for 13 years. His breeder named him Lincoln as he was the first dog she had ever sent to the states and wanted a very American name .I cant think of one that fit him any better. I miss you old boy.

After his passing, I decided that all my future flatcoats would be named after strong, influential presidents . I chose Ronald Reagan, the “Gipper”, the “Great Communicator” for the name of our newest Pemberly member, “Reagan”.

In closing, a quote from our last great president,

“Whatever else history may say about me when I’m gone, I hope it will record that I appealed to your best hopes, not your worst fears; to your confidence rather than your doubts. My dream is that you will travel the road ahead with liberty’s lamp guiding your steps and opportunity’s arm steadying your way.”

This entry was posted in The Reagan Diaries. Bookmark the permalink.