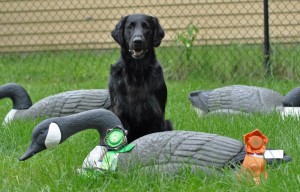 Keaton and I have managed to add 2 master hunter legs and 1 finished retriever leg to our bag in 2011. His third leg came at the Michigan Flyaways Test in May and his fourth at Cuyahoga GRC test in June. Friend and Pro Trainer, Jim Price of DaySprings Retrievers put the UKC finished leg on him in May. My lack of gun handling experience made me uncomfortable trying to handle a dog AND a gun at the line.

Our 2011 season started a little rocky though with me picking him up in the first series at Backwater’s spring test. I entered knowing that we had little training under our belt with the harsh winter and rainy spring. On the monday of test week, Keaton is squinting his right eye-he has a small superficial corneal ulcer(scratch). Most retriever clubs will refund an entry minus a small office fee for sick, injured or in heat dogs. I called the Hunt test secretary letting her know that our attendance was iffy.

The ulcer healed quickly so I decided to drive up the morning of the test since it was a “short drive” at 2.5 hours. My normal hunt test strategy is to arrive 1-2 days ahead of the test to acclimate Keaton to the trip. Keaton tends to get very “ramped up” at trials as he loves his work. When possible, I try to arrange training with friends in the area . This helps reduce his excitement level once test day arrives.

Arriving 1 hour prior to post time was not a good idea. The car ride was uneventful, but once we pulled in Keaton knew there were BIRDS to retrieve. I managed to get a nice long walk in on the grounds, but I could tell when we left the final holding blind that it didnt look promising.

It was the Land Series : a triple with a double blind and an honor. The marks were converging, the cover moderate, and the terrain mildly rolling. The bird placement was good and the test looked fair.

Keaton came to the line pretty comfortable with the thought that I was just there for the ride. He was pretty loose on the line , but somehow managed to stay in front of the break line. Since he was so excited, his marking suffered and he rolled past the first mark toward the second and found neither. He was getting dangerously close to a “hot blind”.  A hot blind is one where the blind bird has already been planted and if the dog picks up the blind before the mark then you are out! I whistled him for a sit, but he handled poorly. After only a half-hearted response to play with me, I called him in.

Test over. Lesson learned: Dont enter a high charging, lightly trained dog in a test in early April. I hope I remember this next spring!