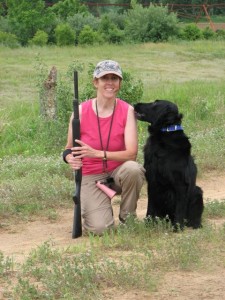 After finishing his master title, I decided it was time that I learn to handle a gun so we could run the UKC hunt test program. One of the biggest differences between the UKC and AKC tests, is that the advanced levels require the handler to shoot the gun from the line using primer shells.

The UKC stresses the importance of gun safety at all levels. Before each series , a judge shows proper gun handling. If a gun barrel is aimed at a dog or person, the team is automatically  failed. One warning can be given  for leaving the chamber closed or the safety off. Another automatic failure is handing back a gun with safety off AND chamber closed. A pump gun is the gun used at the test(often a remington 870).

The UKC program works on a point system vs the number of “legs” or passes. Started (SHR)requires 20 points(each leg worth 5). Seasoned(HR) requires 4o points of which 10 points can be from started.  Finished(HRCH) requires 100 points(upland points do not count) of which 40 can be from seasoned.

Keaton received one pass last spring with friend and pro trainer , Jim Price, handling him. I knew I wanted to do this myself so I spent time having friends coach me on using the shot gun this season. One of the most difficult parts for me was the shells jamming in the chamber and improper timing. You should swing the gun to help your dog find the next mark as the birds goes in the air.

We started the season in mid may at Kalamazoo HRC club test. Despite a mild winter season, the holidays and other obligations did not  allow for much training in the field or the obedience ring. The first test of the season usually finds us with cool temps and a ramped up dog. One of the difficulties that all performance handlers find is trying to recreate a “test” or “trial”-like setting in training. Most dogs know the difference-whether it be the nerves of their handlers or the lack of treats and collars, these dogs know its the real thing.

This May did not include the cool winds of spring and  felt more like mid-August. Unfortunately, the heat did not appear to cool Keaton’s engine . It was the first test of the season and he was pretty sure he could drive the bus. I was not surprised when he broke, but was able to call him back. One controlled break is allowed at finished. Unfortunately, he repeated his performance on water and we did not finish the test.

Keaton usually is a more settled dog the second day of testing, but I knew he was still going to be hard to control at the line. He broke again-this time he was not given the opportunity to retrieve and we scratched him from the water series. We needed to train.

Once a week training was not enough to keep Keaton tuned and in control. Although Indianapolis does not offer a lot of training grounds(fields, cover, ponds), we are still able to use our mowed lawns and parks to practice concepts and drills to fine tune the skills needed by upper level dogs. I made use of  long lunch hours and evenings to reinforce these skills. On weekends, we tried to meet with other area trainers and work on marking setups, gun handling and steadiness.

In mid-June we signed up for BackWater Retriever Club’s UKC test in Northern Indiana. We had had little rain since May and many of the ponds used by the club were nothing but dried up holes in the ground. The temperature was in the upper 90’s and the judges were asking handlers not to let their dogs put up long hunts to prevent heat exhaustion.

Swimming does not necessarily cool off a dog especially when the water is like bath water. I made sure that the dog’s had plenty of cool(not ice cold) water, shade and fans on their crates to circulate the stagnant air. Many of our hunt test dogs are so driven to work that they continue to gear up despite the heat so its their handler’s job to gage their dogs.

Although Keaton needs time to settle in, I took him on several short, controlled walks on the grounds before we ever entered the first holding blind. Even when the temperatures are more moderate, the longer he sits in a holding blind, the more excited he will become and we rarely go into the last holding blind(the one closest to the line)before called. I stay on alert though so not to slow down the test and have the judges or marshall upset.

Unlike Master, Finished only has two series: land and water and both require a triple and a blind. There are no  double blinds but a honor on 1 series. As a result, they can finish the test in one day although it may be a LONG day.

The water series on saturday was in the stick pond. The drought and shallow water made the going tough as most of the marks were in lunging water with sticky muck on the bottom of the pond. Thats when owning a black dog is deceiving as you dont REALLY see how dirty your dog really is, but you sure can smell them!

Due to the rough water conditions and heat, the marks were  short. Short marks are often more exciting to the dog and may often cause a hard charger to break. ” Break ” infers that the dog went for the retrieve before he was signaled to go for the bird. Here again is another difference between AKC and UKC. In AKC, the judges release the command for the handler to send the dog. In UKC, the handler determines when to send his dog. However, the bird MUST have hit the ground before the dog is sent in UKC as well as AKC tests.

Keaton was working well despite the heat that weekend and managed to pick up legs 2 and 3 that weekend. The judges were very impressed with this non-labrador in their test. On saturday, he ran the best water blind of the day being the ONLY dog who took a direct line to the blind. The line was over a log and no other dog took the log on the way out and few on the way back.

Keaton finished his UKC title in August at the Kalamazoo Test in Michigan. The test grounds in Michigan provided some challenges in the water as they covered with large lily pads. They are actually spatterdots as they had deep, thick roots making swimming a challenge if the marks are through the pads.

In addition to providing a tough going, the picture to the dogs is challenging as it is easy for the dog to lose his mark as they make their way through the pads. Keaton got lost on the memory mark and had to be handled. I chose not to run the blind as it was even tougher and he was tired.

Sunday provided another opportunity to title. We ran clean on the water and had the land series in the afternoon. He ran the land marks well. I was relieved that we did the tight marks despite and a  blind  in close proximity that many dogs were winding before they picked up the memory bird. I started to leave the line and the judges said, “Aren’t you going to run the blind?” I was so glad we had finished the marks that I had forgotten the blind and I forgot about MY DOG who had grabbed a bird of the ground and was trotting around with his “prize”. I told him to heel and he looked at me like “its MINE”. He started to freeze on the bird(This is when the dog starts to clamp down on the bird, look glassy eyed and doesnt want to release the bird). I was FINALLY able to get him to release his treasure. I knew they could fail us for disobedience, but I think his work that day was so good that we got a reprieve.

In typical UKC style, we received our final UKC ribbon for the title AND a bucket of ice cold water poured down your back for your hard work. What’s next? 500 point UKC title, the Grand? The master national? No to all of them,  but we may run tests for fun , we will try to go hunting and we will always train. This is what he loves and I love that he loves it.