They have arrived at Pemberly 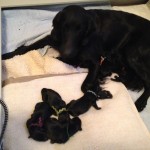 As any first time mom, she was pretty worried and confused about what was happening and stuck pretty close to me. She did not even really want to lie down and almost delivered the first puppy standing.

At 5:18 we had our first puppy, a boy weighing in at 1# 1/2 oz. We helped her open the sack but then Nancy cleared his nose and throat of mucus by gently swinging him to dislodge any fluid. It is not uncommon for newborn puppies to have fluid in their airways from “floating around in the amniotic sac”. This can prevent their lungs from expanding and nostrils from taking in oxygen and if not swiftly resolved prevent the puppy from breathing. Blue collar boy quickly complained that he was ready to take on the challenge of life and he was placed with his new mom.

Taylor relaxed once she understood her new role and started grooming him  from head to toe. In succession of about 15 minutes intervals, 3 new girls arrived and were weighed, cleaned and given rickrack collars of pink, purple and red respectively. Since flat coats come  in only black or liver, colored collars allow us to identify each puppy.

An hour rest period followed which allowed us time to clean up the box and make sure the new arrivals were suckling . It is important that puppies nurse within the first 24 hours of birth in order to acquire colostrum from their mothers. This is a rich source of  antibodies to protect the newborn from common diseases.

Part two: The second horn- After our wait, we saw the arrival of 2 boys green,  and orange. According to our x-ray, we had our six puppies . Mom relaxed and nursed her pups. Time for a glass of wine and cheese snacks(for the people).

Well, the truth about x-rays is that they don’t tell all. It only tells you the minimum number of pups. As we were “celebrating” our success, another boy(lime green-we were running out of ribbon ) entered the pack followed by another girl(rainbow) 30 minutes later. Miss Rainbow was the smallest of the bunch weighing in at 9+ oz. Its all about attitude though as she found the faucet quickly, moving aside her bigger siblings. Its 9:30 pm and all is quiet.