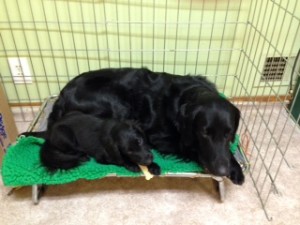 Taylor’s 1/2 sister, Reagan, has taken over the role as Team Leader/Babysitter. She has been very interested in the babies since they arrived on the 9th. Taylor was very protective of her puppies the first few days and then more and more comfortable with the other adults(canines) as the pups got bigger and more lively.

Keaton is a typical boy and avoids the room where the “crib” was once the pups became more mobile. At 5 weeks, Taylor only makes guest appearances to her pups to make sure they are all present and accounted for.

Reagan is all about having fun. Everyone is her BFF. She is definitely the dog in charge here at Pemberly but has been very respectful of the little pack of eight belonging to Taylor. She has never jumped into the whelping box but will stand outside with her head over the top watching them as her whole body wags. Now that the pups are also playing in an exercise pen, Reagan can often be found lying up close to the pen on her belly with her nose through the pen as the babies come up and lick her through the bars . They extend their  tiny paws in play at their Auntie.